What Do You Need to Let Go to Reach Your Destination?

I’ve never forgotten a story Meg Wheatley told in a workshop many years ago.  It came back to me recently with force because I’m facing some tough climbs I hadn’t envisioned.  If you feel stuck or frustrated, it may speak to you as well.
As pioneers gathered along the Missouri River for the 2000 mile journey on the Oregon Trail to the rich farmlands of the Pacific Northwest, they had to pack everything they would need for the journey and their new life into a covered wagon (or two if they were wealthy).  Can you imagine packing everything you will own for the foreseeable future into one wagon?  Furniture, tools, crockery, clothing, food, seed and more had to fit into a space smaller than a single room. 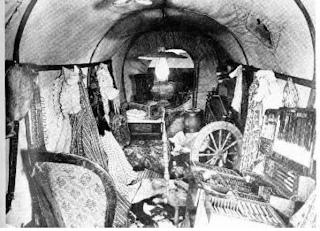 Most people had some tough decisions—whether to take the heirloom mahogany dresser, or the rocking chair that soothed several generations of sleepless babies, or a child’s special doll.   These were belongings so precious it was impossible to think of leaving them behind.
Things were not easy crossing the plains, but the real shock came when the wagon trains reached the Rocky Mountains. Teams of oxen which had pulled wagons hundreds of miles across the flat plains couldn’t get up the steep slopes.  Wagons that seemed so stripped down in St. Louis were now overburdened.After facing so many hardships, pioneers had re-evaluate their belongings again.  What did they possess that was not absolutely essential for their new life?  What did they have to let go of in order to get to their destination?
This was a critical decision.  The right choice made it possible to move forward and to succeed in a different world from the one they knew.  The wrong decision meant worse hardship and probably death.  When you got to the Rockies, it was almost impossible to turn back.
How many times do we have a goal we want to reach, a destination precious to us, a door we want to open?  It could be more meaningful work, a new relationship, a sense of peace.  How often, when faced with an obstacle to our dream—our version of the steep Rockies--do we hold onto something—an attitude, an assumption, an old behavior—that keeps us at the foot of the mountains.
Our task, then, is to ask ourselves what we are carrying that we no longer need.  What must we abandon—like the furniture, the silverware, or the china bowl left in the desert—that was precious once but can no longer be of service?
For me, one thing I must abandon is the old idea that success is measured by how much money you make.  I’ve been amazed at how deeply this assumption is ingrained in me—so much so that I didn’t even recognize it.  I thought I was driven by more noble values.  But I cannot live the life I want as long as this is my measure.
What’s in your wagon that needs to go?
Plum Cluverius, PCC is an executive coach with over 30 years experience in leadership and professional development.  She lives and works in Richmond, Virginia.

2 Responses to "What Do You Need to Let Go to Reach Your Destination?"

Click here to cancel reply.
⇐ Six Alternatives to the Dreaded Elevator Pitch
What Does God Want Me to Do? ⇒
© 2021 Vedere Consulting