The Lever That Brings About Change

What we learned in the last post about immunity to change based on Robert Kegan and Lisa Lahey’s book of the same name is that resistance to change isn’t about inertia or lack of will, but is the result of an unrecognized competing commitment.  These hidden commitments cause us to behave in ways that seem inexplicable, (drinking a diet soda because you’re watching your calories and then having a big mac and fries for dinner), and irremediable  (I’m never going to change because that’s the way I am).

But there’s something behind the competing commitment and this something is the lever that can bring about the shift in perspective that’s needed to create real and lasting change.  Kegan and Lahey call it “the big assumption.”  Your hidden, competing commitment is so strong because there is a catastrophic belief behind it that fuels its fear.
This belief tends to have an all or nothing quality about it, i.e. “if you want something done right, you have to do it yourself.”  Not much wiggle room there, is it?  Either you do it yourself or you settle for an inferior job.  You can imagine that someone who believes the world works this way would have a commitment to never letting anyone else take care of anything important.
We all have beliefs like that--beliefs formed so early in life we never question their validity. They drive our behavior without us knowing it.  Our big assumptions lead to our competing commitment that leads to the sabotaging behaviors that make the change we want to make impossible.   See the immunity map below for an example: 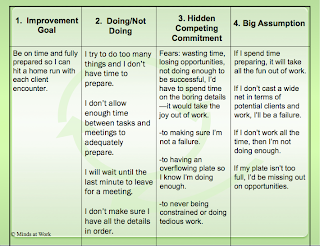 As long as we continue to believe the big assumption is true, we’re stuck.  But if we can test the big assumption, examine it from all angles, see if there’s evidence to show that it’s is wrong at least some of the time or is outdated, then the improvement goal we first committed to becomes much easier to achieve.  Kegan and Lahey have found that it’s possible to see significant results in 3-6 months.

Because each person is unique, the road to overcoming your immunity to change is going to be unique as well.  But there are a number of tools to choose from that have been used successfully with hundreds of people.  These are described in various sections in Immunity to Change.  I’ve outlined below the ones I’ve used with my coaching clients:
Honing Your Map:  Often your first immunity map will be good, but there will be more to learn and better outcomes if you continue to refine it.  The first time I did my own map, coming it back to it later led to a new and more powerful “big assumption” that if I were too successful, I’d end up alone.  I could see then why I often shied away from putting myself out there or taking a big risk.  It wasn’t just failure I was afraid of, it was success.
Self Observations:  One safe way to test a big assumption is to simply notice when you are operating as though that assumption were true and when you see examples in yourself and others that run counter to the big assumption.  If your assumption is that you have to do it yourself if you want it done right, look for examples where someone does it as well as you do (or better).
Biography of a Big Assumption:  Knowing where your big assumption came from is a great opportunity to test its current validity.  One client discovered that her unconscious belief that the best way to change others behavior is to intimidate them came from many of the authority figures in her childhood and in her early career.  Recognizing this helped her question the lessons they taught her for the first time.
Continuum of Progress:  This tool helps you create a concrete vision of what the successful achievement of your improvement goal looks like and the steps you take to get there.  It is a worksheet consisting of four columns:  1) your improvement goal, 2) first steps forward, 3) significant progress, 4) success.  In each column, you identify either specific steps you will take to achieve your goal or what actions you or others are taking that demonstrate progress and success.
You will notice that in these examples you aren’t trying to change your own behavior, you’re examining your big assumption and creating a vision of what your future could be.  There are good reasons for this, which we will explore in the next post.  We’ll also look at one of the most powerful tools in the Immunity to Change toolkit.
Plum Cluverius, PCC is an executive coach with over 30 years experience in leadership and professional development.  She lives and works in Richmond, Virginia.