These are trying times for organizations.  Short product life cycles, leaps in technology, competitive challenges, new business models and more stretch the capacity of leaders and employees alike.  It used to be fine if one could be a good contributor or team player, now we need speed, innovation, flexibility, and self-direction.
But there is opportunity as well.  For organizations that have the brainpower and savvy to navigate the “permanent white water” (as Peter Vaill called it) of our world, opportunities seem boundless.  Google, Amazon, and Facebook are just a few of the most famous examples.  Human capital has become the coin of the realm—and finding and keeping the good talent capable of operating in this world is quite a challenge.
Robert Kegan and Lisa Lahey, Harvard professors, authors and business consultants, argue in their book, Immunity to Change, that organizations who ask themselves the question, “What can I do to make my setting the most fertile ground for the growth (emphasis theirs) of talent?” will ultimately be the most successful.  After studying human development for over thirty years, they have concluded that different stages of adult development lead to increasingly complex mindsets.  When our mindsets are outstripped by the complexity of the world, there is a mismatch between what is needed to succeed and our mental capacity to produce it.
When I speak of mindset, I speak of both the mindsets of individuals within the organization and the mindset of the organization itself.  The good news is that none of us are stuck in our current level.  We  have the capacity to develop greater mental complexity.  Kegan calls this process vertical development.  It is substantially different from skill (or horizontal) development, which is the focus of most organizational and leadership training efforts.  It’s not that skill development isn’t important, but it is insufficient when we are faced with a challenge that forces us to rethink how the world works.  Many of today’s challenges are in that category.
When an individual or an organization engages in the immunity to change process described in previous posts, they are engaged in creating a more expanded way of viewing their world, in other words, they are developing a more complex mindset.  This occurs because the big assumption and the competing commitments that drive the immunity to change initially are invisible to the individual or group.  Once they are visible, they can be examined objectively and either modified or rejected.  The original and important change can then be accomplished with relative ease and the new mental construct can be applied in other situations as well.
Let’s look at an organization’s immunity map.  The example below is from Immunity to Change (it is modified to fit on the page).  The map was created by the leadership team of a professional services firm. 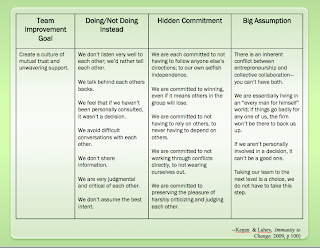 You can see that the assumptions that it’s impossible to be entrepreneurial and collaborative or that it’s “an every man for himself world” would make it impossible for the team to create a culture of “mutual trust and unwavering support” among themselves or throughout the company as long as they are stuck in that mindset.  But the team knew their lack of cohesion and support was costly at every level of the organization and they had to change.  So once they uncovered their hidden mindset, they began testing the first assumption, which they considered to be the most crucial.  They decided first to explore what they meant by entrepreneurism and to see if there were aspects that could actually be supported by collaboration.  They also decided to take 10 new projects or prospective clients and experiment with working together on them to see if they could generate new business that way.   These tests allowed the team to develop a new mindset—that they could be both entrepreneurial and collaborative—a viewpoint that is more complex than their earlier assumption and gave them greater flexibility in generating new business.
The immunity to change process, then, is a developmental activity as well as a mechanism for change.  Kegan and Lahey believe that “leaders and organizations that master the immunity to change will be dominant in their sectors in the new century.”  Organizations can tie personal growth to organizational goals and gain huge leaps in development for themselves and the people who work with them.
Plum Cluverius, PCC is an executive coach with over 30 years experience in leadership and professional development.  She lives and works in Richmond, Virginia.